The Story of The Sharpie

We have all seen The Sharpie that somehow got on the window in the Library overview. But how did it get there? Cade Stone investigates. 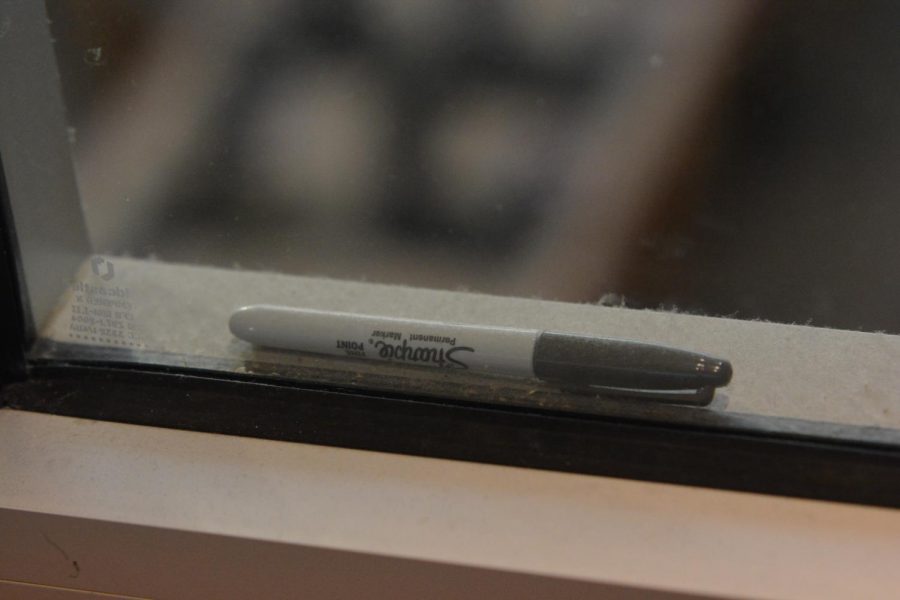 I’ve gone too deep into this rabbit hole. I fear they have almost found me. When I first noticed The Sharpie, I was just a freshman. As soon as I saw it, I started laughing; it was placed so perfectly. I’m not laughing anymore. The Sharpie is a black fine-point permanent marker with a layer of dust from years of neglect. I’m not even sure if it’s completely used. It could be full of Sharpie Juice. The Sharpie is laying there perfectly, somehow not falling after years of precarious positioning. It was either placed there, somehow, or a perfect throw that landed all the way up there. This Sharpie that was once the cause of laughter and joy has now put me on a most wanted list.

The first account of this sharpie comes from Mr. Peace. He claims it has been there since at least the fall of 2014. I’m mostly certain it has been there longer, due to all the dust on it. The question I have always wondered since I got here was: how did it get there? Why is it up there? Who did this? The answer could just be simple, or it could be a long and dangerous quest full of dead ends and goose trails. Which ever one it ends up being, I’m going to figure it all out. Every question will be answered and the origins of The Sharpie will be solved.

Mr. Douglass has an interesting theory. “It has to have been there for a good 10-11 years,” he said. He claims it has been here since the school opened, left here during construction and forgotten, but I’m not completely satisfied with a simple theory. No. I want to get a definite story. Senior Shane Morehead had a more interesting theory. “Some kid just threw it up on the first few days just messing around,” he theorized. When I interviewed Mr. Bradford, he seemed a bit uneasy, claiming ignorance at first but then stating that “it must have been there since 2009-ish.” So, he does know about it. Most teachers don’t even know this ancient relic from the past exists . . .  or do they? Could they be hiding something? Something they don’t want us to know about this sharpie?

I had my final lead, my one shot at unraveling the mystery … I tracked down Tyson and Associates, the people who built this school with their blood, sweat, tears and cranes. Maybe jackhammers too. I found their phone number from an anonymous source, and the phone call went something like this. I called James Tyson, the president of the company. He claims that they didn’t build the library? They built the whole school but not the library? I want answers: who built the library? Has it always been there? At this point, I’m getting fed up with this runaround. All this for a dead end. James didn’t know anything, so I needed to figure out who built the library. I walked to Mr. Bradford’s office with fellow Journalism staff member Victoria McConathy. Mr. Bradford was busy on the phone, Victoria suggested talking to Mr. Schexnaildre, and I agreed. Any lead was a good one. He told us something about ninjas, an obvious distraction from the real goal. What ninja would fling a sharpie onto our school library? He told us to talk to Mr. Whited, a perfect person who knows everything about the school . . . apparently. He told us an extravagant story: something about Mr. Douglass with a tobacco plant that produced Coronavirus. I had no time for his silly games. We finally found a gap in Mr. Bradford’s exceedingly busy schedule and got the name of the construction company that built the library: Manhattan Construction. The only problem was that there were several companies with this name. We called, one got an error message, and then called two other companies with the same name: one sent us straight to voicemail.

Dead ends, this whole story . . . just dead ends. During lunch, however, I got a letter from an anonymous source telling the story of the sharpie (reproduced in full at the bottom of this article.) To briefly summarize, the whole letter blamed Mr. Wynne for throwing the sharpie up there. I will continue this line of inquiry on Monday.

Today is the day we have all been waiting for in #1218; the whole Journalism class was ecstatic. No one has come as far as I have in solving this mystery. The first interview we had was Mr. Wynne, as the letter we received on Friday directly stated that he threw The Sharpie on the window. After marching into Mr.Wynne’s room, we showed him the letter and after reading it for what seemed to be six times, he finally had a comment: “Mr.Whited has a lot more free time than other educators. He doesn’t coach  any sports or sponsor any clubs. His creativity, however, is great, but he failed to supply sufficient facts in this case. This accusation does not merit a response. Case Closed. God bless.” Mr. Wynne, the self-proclaimed “superior educator,” left it at that.

So, was the culprit a kid? Was The Sharpie left by the construction company? Does anyone know? Using my research skills, I found another company  called Manhattan Construction. I called hoping for an answer. I got nothing but a loud error and then the sound of the phone being hung up. I called back, and the Verizon lady told me the phone number had changed. It changed that fast? Suspicious . . .  Had Mr. Bradford fed us a red herring after all? I called the new number, and I had an extensive phone conversation with the receptionist from Manhattan Construction. “The sharpie belongs to a man named Dan,” she said. That’s all she had—perhaps it was all she was allowed to say.

The mystery has been solved. It was left here during construction by a man named “Dan.” No last name nor any other identifying information .  . . a true man of mystery. So, if you, dear reader, have any information about someone named Dan who helped build our school library and who has been looking for His Sharpie ever since, contact Mr.Peace so we can finally, decisively bring this story to a close.

Below is the letter from Mr.Whited’s anonymous source:

“The story of The Sharpie.

The sharpie, despite the rumors, is not an integral part of the building’s structure. The story of how it came to be is much more sinister.

It was mid-March. Mr. Wynne, well-known Trump supporter, was in the media center. Sitting atop a very important looking file folder with the words ‘Mr. Bradford’s Very Important Meeting Materials’ was a brand new sharpie. It caught Mr. Wynne’s eye immediately, as he has a peculiar and, some say, troubling interest in sharpies.

‘Should I take it?’ he thought. He reasoned to himself that God wants him to be happy. Having the sharpie would make him happy. His conclusion, therefore, was that God wanted him to have that sharpie. So, he took it.

Later, Mr. Bradford sent a faculty-wide email asking if anyone had seen his sharpie. It turns out that it was not just any old sharpie. It was a family heirloom passed down to him by his uncle, Jebus Sharpie, who had died tragically in an ink factory accident in 1972. Apparently, Jebus had invented a pen he felt would revolutionize the pen industry. Unfortunately, in trying to get the chemical formula just right, he died from overexposure to toxic fumes. But not before producing the very first sharpie, the very sharpie that he left to his beloved nephew, Ronald Bradford,

When Mr. Wynne read this, he thought to act quickly. Normally, Mr. Wynne is an honest and conscientious person. But all too often even the noblest person can be driven to wickedness under pressure. In a plot to cover his tracks, he rushed back to the media center to replace the pen on the ground under the table where he had stolen it. Just as he had the pen in hand, about to drop it, Mr. Bradford walked in. In his desperation, he flung the pen into the air. As the sharpie flipped across its arc, all time seemed to slow down. Where would it land? How would I explain this? How will this lawsuit end? All these questions swirled in Wynne’s mind as the pen climbed high into the air, only to find its resting place on the window sill high above the media center entrance.

Mr. Bradford can only enjoy his precious heirloom from behind a glass.

Out of respect for their beloved leader, the faculty speaks not of this incident.