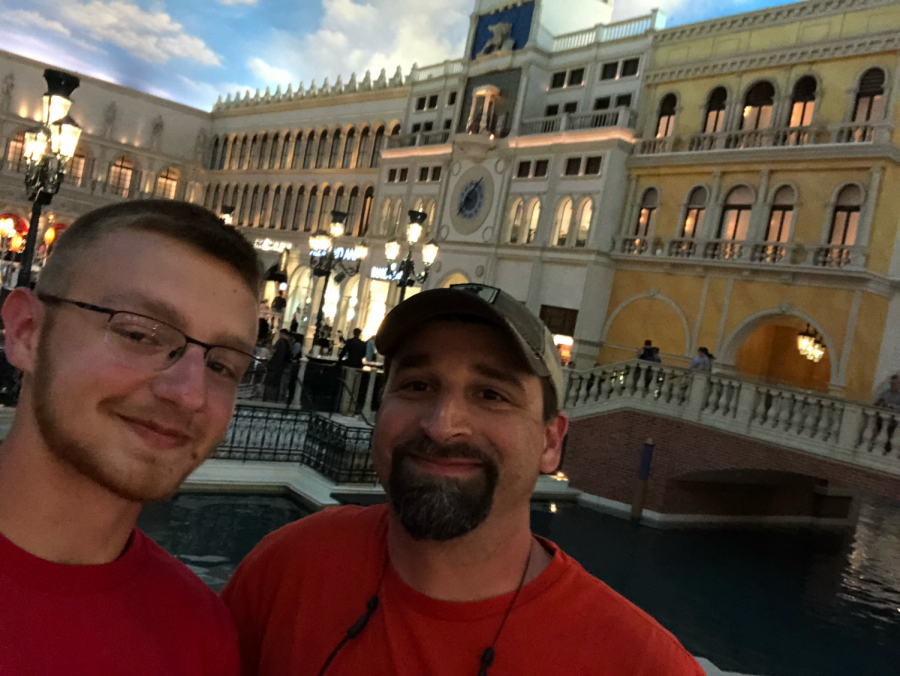 “The apple doesn’t fall far from the tree.” Parents and their kids hear it all the time, and it strikes up mixed emotions for different people. It’s said that kids often reflect their parents and that sometimes kids favor their father or mother more. For me, I think I have a good mix of both. I am more quiet like my mom at times and have my dad’s sense of humor. My dad and I enjoy doing many of the same things and even use the same phrases or have the same reactions when responding to situations. However, when I think about how I am now, it makes me wonder what my dad’s life was like when he was younger. Was he like his dad? Did he perhaps take more after his brothers? We have talked previously about random memories but never about the silly trivial things that he did. So with these questions ready, I sat down and prepared to get some answers about his life.

My dad, Michael Anchondo, isn’t even from Georgia. He was born in San Bernardino, California, and at six months old, he moved to Ringgold, GA. Growing up he would go back and forth between the two states to visit family. Knowing this, I wondered which he preferred.

“Life is much slower in Georgia. There are also fewer people. I’d say I preferred Georgia,” my dad responded.

Along with jumping from state to state, my father had three older siblings. His older brothers, Chris and Brian, were always the focus of many interesting stories I had heard from different holiday gatherings. He also has an older sister named Teresa. Together, they all got in plenty of messes growing up. He has shared different memories from his childhood about them, but I wondered if he had one just about his childhood that he specifically thought was special . He brought up the time that he received an 18-Wheeler toy for Christmas. To me, this is special because I know that my grandpa, Aurelio Anchondo, was a truck driver. He spent a lot of time driving from place to place delivering all sorts of items. Some of my favorite stories I have heard about him are from when he drove trucks for Little Debbie. So for my dad to receive this toy was a cool link for him and my grandpa in my opinion.

In the past, I have thought about whether or not my dad and I would have been friends if we had been in school at the same time. My dad describes his high school experience as a difficult time but one that helped develop him into the person he is today. He also had this to say about what he was involved in.

“ I was into fishing, swimming, repelling, and caving. I was also a diver for my school and for the Chattanooga Dive Club.  I won state on both 1 meter and 3 meter boards in the early 90’s,” Dad recalled.

One of the things my dad says shaped his life the most was his decision to join the Marines. He explained that the military was something that was just always present in his family. His oldest brother, Chris, was in the Army, and Brian was in the Navy. As a teenager he wasn’t interested in following that path, but by the time he was nineteen, he saw it from a different perspective. I imagined with a decision that big he had to have a lot of thoughts in his mind, so I asked what was pushing him towards and pushing him away from the choice to sign up. He said that he wanted to make something of himself that his family and that he personally could be proud of. Fear was the only thing pulling him away from it. My dad would tell you that he would do it again and that he misses it all the time. He often tells me about the lessons he learned through the military. He learned valuable skills about being a leader, how to push himself past the limits he put on himself, and he found that the military is a brotherhood that can’t be compared to any other.   He is very passionate about these ideals and has led me to believe in it just as much as he does.

“ You are so much stronger than you believe, depending on how much heart you have. NEVER give up, NEVER quit, and finally the human body can handle much more than you would think it could” as he would passionately say.

On a lighter note, he has also told me many funny stories about his time in the military. His favorite one is from where it was his first time in the field. He was placed in the Battery Bunnery Sgt. Humvee as a joke and told how to answer the questions the Sergeant would ask him. He knew they were the wrong answers but the reaction from the Battery Gunny was hilarious.  Obviously it wasn’t as funny at the time but, he said, “Looking back and thinking about it, the Gunnery Sergeant chewing my Sgt. out while everyone else was laughing hysterically at my answers was probably one of the funnier times I can remember.”

Reflecting on all these new insights into his life, I see how I reflect my dad already, but I also see how I want to be like him. Looking at the decisions he made and how he got to where he is in life, I know that with hard work and determination, you can achieve whatever you are passionate about. My dad’s childhood had bumps in the road, but he uses that to make sure I don’t hit those same bumps. His hard work has given me the life I have now, and I can’t be thankful enough for that. So for me, the phrase “the apple doesn’t fall far from the tree” isn’t something to moan at—it is something to be proud of.