Getting to Know Gunner Bryson 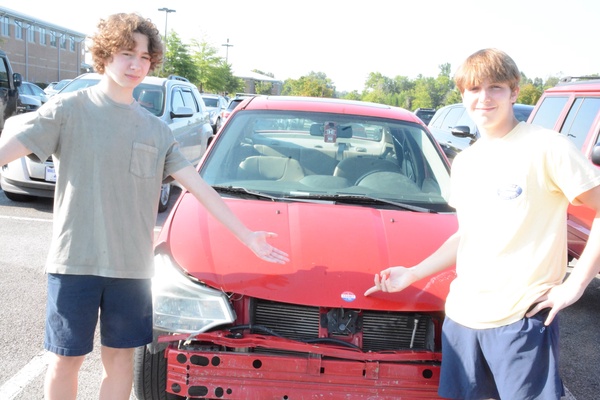 When the world seems to be falling apart around you, it’s good to keep your cool, and that’s exactly what Gunner Bryson seems to be doing. As an 11th grader at Heritage, his whole high school experience has seemed to revolve around COVID, but luckily Gunner is a very go-with-the-flow kind of guy who is just trying to make the most of it all. “I know some people are very angry about COVID, and I guess rightfully so, but I’m not really mad,” he said. “I think I’ve had better luck with it than most people.” Even though this change hasn’t been as earth-shattering to Gunner as it would be with most people, there is still the matter of curing that looming boredom.

Thankfully, he already had that figured out. Video games are a big part of Gunner’s life and have helped shape him into the person he is today. When you hear “video games” and “life-changing” in the same sentence, it may seem irrelevant, but it’s not. When playing a game, you must learn from your mistakes, regroup, and try again. It teaches perseverance, strategy, and shows that in some ways everyone can be a hero. Gunner claims that if he could only play one game for the rest of his life it would either be “Dark Souls” and “Sakiro Shadows Die Twice.” “There are so many different challenges and bosses,” said Gunner, “and so many different ways to play the games.” However, don’t let him fool you: video games are just the beginning. Gunner is also an avid music listener. He likes an array of different music and artists, but recently he has had one song stuck on repeat. “More recently, [I’ve been listening to] this song, ‘Rise’ by Tyler the Creator,” Gunner explained, “I like Tyler the Creator because of all the many sounds that he has.” He enjoys how listening to just one album can be so dynamic.  Some of his other hobbies include watching movies, TV shows, and playing with his Golden Doodle, Graham.

Although school has been unusual for Gunner, he has managed to juggle all its ups and downs. Part of his success has to do with the people who are in his life. “I think my favorite part of Heritage is probably the friends I’ve made. I really like everybody I have met so far, like Sam, Ian, Ethan, Alex, and Connor. Gunner recalled memories of he and his friends goofing around in the library after lunch. “Every time I go to the library . . . with all my friends is pretty fun even though we almost get in trouble.” Besides his friends, Gunner’s family are definitely some of his biggest supporters. They want him to achieve his ambitions of getting into a good college and having a good job. His brother is an eighth grader this year at Heritage, his mom is an occupational therapist and realtor, and his dad is a UPS driver. Gunner is a lot like the members of his family in many ways. “My mom says I’m responsible like her and that I’m similar to my dad in the fact that I’m witty, I guess,” he said. He also shares a lot of similarities with his brother which allows them to get along really well. They share the same tastes in movies, games, and some music.

After high school, the whole career thing is still up in the air for Gunner, but he is sure of one thing: he wants to move away from the South. “I definitely know I kind of want to move away . . . to maybe the Pacific Northwest or Oregon.” he said. He loves the plants and the open green landscape of it all. Unlike most people, the future doesn’t scare Gunner, but you know what does . . . COCKROACHES! He has always been scared of bugs. They really gross him out, but his specific fear of these indestructible insects began one night long ago. “I was really sick one night and it was really late. I was sleeping and I heard something fall. I woke up, got my flashlight, and shined it on the ground. And there was a big cockroach crawling all around.” That’s enough to make anyone terrified of these creepy crawlies, especially Gunner.

Gunner Bryson is definitely one of those people that you want to know in life. He is effortlessly funny and kind to anyone he meets, two qualities that automatically make him an awesome person. He is still trying to find his way in life but there is no doubt that he will. Gunner sees the world as an opportunity to learn more about himself, whether through school or the next video game he plays. Either way he is still growing as a person and I wish him well on his journey.