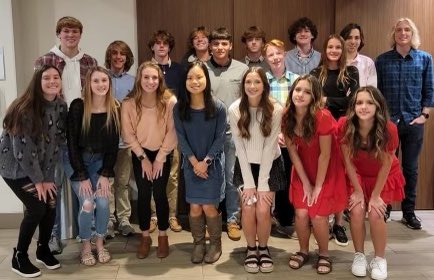 The Cross Country team had another great season this year with the team competing in many races this season. We competed in the Cherokee County Classic, Run at the Rock, NGXC League Meet in Rocky Face, the Southern Showcase, NGXC League Meet at Edwards Park, NGXC League Meet “5 Star Stride,” NGXC League Meet “Grove Level,” NGXC League Meet at Heritage Fast Break, and, finally, the Region 7AAAA Championship and the State AAAA Championship. Coach Craft singled out the Southern Showcase in Birmingham, AL as one of the best meets of the season. “We had the most Season Bests/Personal Records of the season,” he said. “The race was a huge, high-level event, and everyone that was able to attend had a great time. The race ended memorably with the team having to pack up in a flooding, monsoon rain storm but, overall a great time was had by all.”

Coach Crowder is very proud of how the team ran this season. “I am most proud of moments when our teammates come together to cheer on runners, as well as those that got their personal record(s). More specifically, I am proud of Zoie St. John, Davis Justice, Will Riddell, and Gavin Chandler for placing in the top 50 in the state championship,” he said. Coach Craft noted that he was “proud that the team worked hard, overcame the adversity of illness and Covid.” The group of individuals came together as a team and finished as one of the best teams in the State,” he said, “and no one quit.  Everyone that started the season finished the season.”