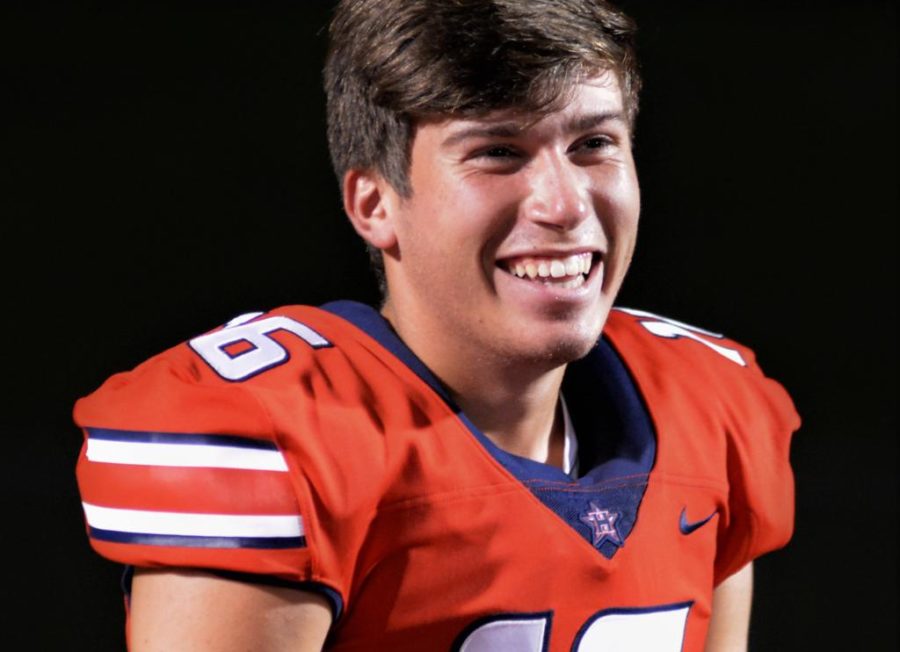 “It’s probably the most honorable thing I’ll ever do,” Anderson Britton, Heritage’s 5-Star kicker, says regarding his commitment to West Point, Army. After sitting down and talking to Anderson about his commitment, I would have to say that I agree. Committing to West Point for Britton is a lot more than just a continuation of his football career, but let’s go back to where it began.

Anderson’s interest in playing football began in third grade: “I liked watching football, so I started playing,” he explained. While Anderson is an exceptional kicker, that’s not the position he started out playing. When Anderson first started playing football, he was a wide receiver and a corner. He didn’t begin his kicking career until freshman year. “Coach Slaughter wanted me to just kick because I was really good at it, and he didn’t want me to get hurt,” he said. Throughout Britton’s high school career, he has had several accomplishments, such as making All-Region every year and  being ranked second for kickers in Georgia for the class of 2022, plus Britton has tied the school record for longest field goal: 44 yards! With help from Coach Lollis, Britton recalled one of his most memorable plays. It was fourth down against Pickens, and the ball was intended for Anderson as they were in position to kick a field goal. This was only a pose, however: “Nick stood up and threw me the ball, and I got hit. But I got the first down!” Over the span of his time here at Heritage, Britton found himself developing a lasting relationship with the coaches. “I can talk to them whenever; they’ve always helped me when I needed them . . . They care about football, but they’re [also] friends,” he said. Anderson reflected on spending Wednesday nights at Coach Hight’s house eating dinner with a few of the coaches’ families, as well as other players! Britton highlighted his kicking coach, Coach Simpson, saying, “He’s another set of eyes to see if I’m doing anything wrong and to help out with that.” Britton also gave a shout out to his fellow kicker, Chipper Grayson, reminiscing on their runs to DJ’s Country Market after practice to get their favorite drink and snacks, Monster Khaotic and Crunchy Trolli Gummyworms.

When asked about his greatest accomplishments, Britton didn’t lead with his football statistics; instead he said, “I’ve never made a B! All A’s for high school!” Britton’s exceptional GPA and his striving for academic excellence may be another factor that piqued Army’s attention. Anderson shared, “The coaches recruited me harder than any other school; they would always talk to me.” Britton would receive three calls a week and had four coaches texting him every day. Although Britton had other schools contacting him, such as Georgia Southern and Southern Miss., as well as Mississippi State, his sole finalist remained Army. “It was a really good education, and their football coaches are making the program more competitive . . . It’s the best of football and education,” said Britton on his final decision.

Britton explained his recruitment process, saying that “when I first started getting recruited, I would just talk to the coaches and send in my kicking film, and that was normal for recruiting.” Once Britton was committed, he shared, “there’s a whole file you have to fill out for the school, you have to do a physical test, send in transcripts, essays, and then you have to get approved by a Senator or Congressman.” Anderson has recently set up an interview with Congresswoman Marjorie Taylor Greene, where he will speak in front of a committee and eventually talk with her independently. If Britton is not approved by Greene, he will have the opportunity to be appointed by the Superintendent of West Point, Army. Although he has already been accepted by the school, the appointment will be what gives Anderson a place in the football program.

Anderson’s acceptance and attendance on a full-ride scholarship sets him apart from others with stellar academic achievement and exceptional kicking abilities.