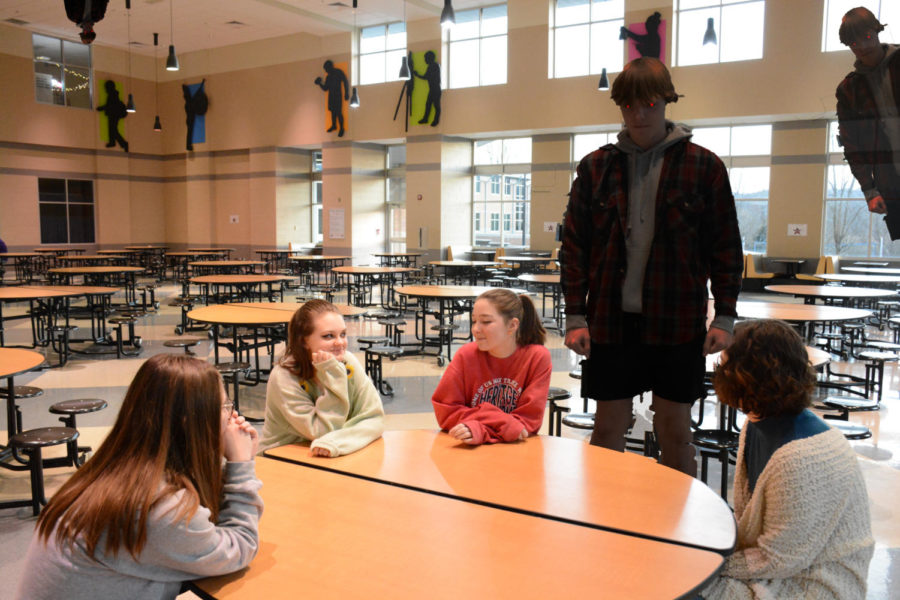 There are a lot of problems facing the world. Some of those problems are world hunger or climate change, but one that has gone underground is taking the school by storm. The biggest problem facing the school currently is table invading.

You, the reader, might be asking yourself, “What is table invading?” Table Invading is best described in the form of an example. Say you are sitting at a table with some of your friends, and there are maybe three seats out of the eight seats left. Someone you are friends with comes and sits with you, which might be fine unless they initiate table invading procedures. That person might be friends with a lot of other people that you might not necessarily be friends with. They will then come and sit with you, and so phase one begins. These “table invaders” begin to sit at your table every day, waiting for the person that they are friends with to sit down. Over time they accumulate at the table and before you know it, the table is taken over, and there are no seats for you and your friends. Often, you and your friends will have to stand around the table awkwardly until one of these “table invaders” gets up.

There also exists another form of table invading known as “room invading.” Room invading occurs when you and your friends are eating in a teacher’s room, and people that you are not necessarily friends with will come and fill the room. Often people will become very loud and completely disrupt the conversation you are having with your friends.

I spoke with Heritage Students about how they feel about “Table Invaders.” “I’m extremely upset about having to stand around the table and wait for people to leave,” said junior Sam Ashook. “It’s caused many arguments among my friends and the people around me.” Sophomore Sophia Benavides remarked, “It’s just annoying. They come into our room and get really loud. We’ve even got noise complaints from classes around ours because of them.”

Of course, there are exceptions to the problem of table invading. If a completely different group of people that you don’t even know have decided to sit at your table, it is okay for you to sit down and stare at them menacingly until they leave. It is also okay to invade a table if the person sitting is an underclassman, but this doesn’t happen often as most people claim tables at the beginning of the school year.

To better understand the threat facing the school, I spoke with one of the most prominent table-invading catalysts, junior Connor Richardson. “I think I’m the sole problem facing Heritage by accident because all I did was try and sit with my friends, but my other friends happened to sit with me,” he said. “But you’re right: I am the complete problem facing Heritage, and I should definitely face some punishment, possibly giving you a present or something.” [This is an actual quote from Connor].

How can we solve this problem facing schools nationwide? The troubling thing is that we really can’t. The school has decided to not designate tables for people, so it is a dog-eat-dog world. Hopefully, one day in the near future, the superintendent will allow students to leave a nametag of some sort claiming tables or allow students to claim tables at the beginning of the year like a parking spot, but until then we must continue living in this awful, dystopian world.